The Treasure of the Heart(h)

There once was a pious rabbi who had a dream in which a voice told him to go to far off Prague, where under the great bridge to the royal castle he would discover a hidden treasure. This same commanding dream was repeated twice.
He finally decided to go, making the long journey by foot. On arriving in Prague he found the bridge; but as there were sentinels posted there day and night, he did not venture to dig. However, day after day he returned and loitered around, unostentatiously trying to study the situation.
Finally, he attracted the attention of one of the guards. "Have you lost anything, my good man?"he asked. The rabbi told him of his dream. The officer laughed and exclaimed, "You poor man, to have worn out a pair of shoes travelling all this way only because of a dream! Why I had a foolish dream once. A voice commanded me to go to Kracow and search for the home of a rabbi Eisik, son of Jekel, where I would find a great treasure buried in a dirty corner behind the stove. Imagine believing is such a dream." and he laughed again.
Rabbi Eisik bowing politely bid the officer farewell. He then hurried back to Kracow. There he dug under the neglected corner behind his stove and found the treasure, thus putting an end to his poverty.
In commenting on this tale, Heinrich Zimmer in The Choice is Always Ours writes:

Now the real treasure, to end our misery and trials, is never far away; it is not to be sought in any distant region, it lies buried in the innermost recesses of our own home, that is to say, our own being. And it lies behind the stove, the life-and-warmth-giving center of the structure of our existence, our heart of hearts - if we could only dig. But there is the odd and persistent fact that it is only after a faithful journey to a distant region, a foreign country, a strange land, that the meaning of the inner voice that is to guide our quest can be revealed to us. And together with this odd and persistent fact there goes another, namely, that the one who reveals to us the meaning of our cryptic message, must be a stranger, of another creed and a foreign race.

The German Indologist, Heinrich Zimmer was one of Carl Jung's few male friends. After Zimmer's death in 1943, the well-known anthropologist Joseph Campbell (another great friend) edited his writings for publication.
Zimmer felt that Western civilisation was at a crossroads; a turning point that had been reached in India around 700 BC: an encounter with the Self of the Universe. 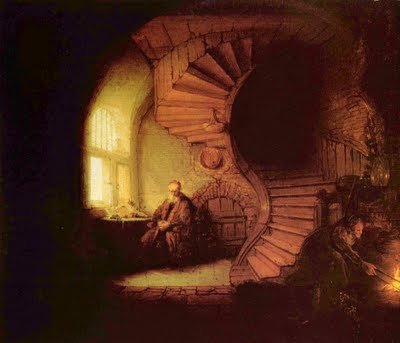 Rembrandt, The Philosopher in Meditation.
A wonderful interpretation of the symbolism behind this painting here.
Posted by jeronimus at 6:30 PM No comments:

Email ThisBlogThis!Share to TwitterShare to FacebookShare to Pinterest
Labels: art, Self

A Hall
The road led straight to the temple.

Notre Dame, though not Gothic at all.
The huge doors were closed. I chose one on the side,
Not to the main building- to its left wing,
The one in green copper, worn into gaps below.
I pushed. Then it was revealed:
An astonishing large hall, in warm light.
Great statues of sitting women-goddesses,
In draped robes, marked it with a rhythm.
Color embraced me like the interior of a purple-brown flower
Of unheard-of size. I walked, liberated
From worries, pangs of conscience, and fears.
I knew I was there as one day I would be.
I woke up serene, thinking that this dream
Answers my question, often asked:
How is it when one passes the last threshold?

Miłosz observed that those who became dissidents were not necessarily those with the strongest minds, but rather those with the weakest stomachs; the mind can rationalize anything, he said, but the stomach can take only so much.
His nonfiction book The Captive Mind (1953) is a classic of anti-Stalinism.
Posted by jeronimus at 9:42 PM No comments: 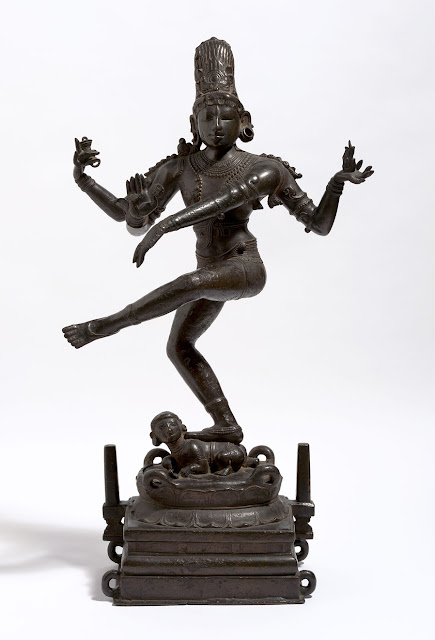 An early Chola Bronze Figure of Siva Nataraja. Tamil Nadu, South India. Circa 950-1000 A.D
This exquisite South Indian bronze represents Lord Shiva, the embodiment of Universal Self or Love.
He is shown with one foot subduing a dwarf demon, representing the ego and ignorance (the small self). One of the left hands gestures towards the other foot, signifying that the way to Self-realisation is through devotion (in Indian culture, the feet of divine beings are a particular focus of worship). Poet saints have often referred to the Feet of the Lord or the Goddess as a place of refuge from the devastating illusions of the world.
The upper right hand holds a damaru (small drum), a symbol of creation; while the far left hand holds the fire of cosmic dissolution.
For the Self there is no Creation and end of the world. Self and World are one and the same. The world is brought into being, and annihilated, from moment to moment. There is no such thing as a time of creation in the distant past, nor a future doomsday to dread.
The fourth hand is held in the abhaya mudra (gesture of reassurance), telling the viewer not to have fear.
image source: Oliver Forge and Brendan Lynch Antiquities, Indian and Islamic Art
Posted by jeronimus at 2:15 PM No comments: