The Goddess in the Bible 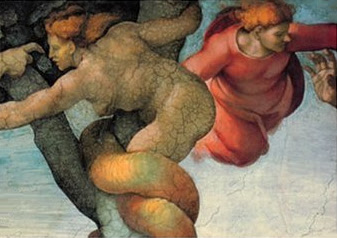 In this detail from the Sistine Chapel, Michelangelo depicts the serpent in the Tree of Knowledge as a female entity. Serpents are ancient symbols of wisdom associated with the Goddess. It's interesting that Michelangelo visually links, through juxtaposition and hair colour, the serpent of wisdom and the angel driving Adam and Eve out of Eden, suggesting almost that they were one being, a single aspect of the Self which manifested to push humanity out the blissful ignorance of a pre-human, animal-like state into a higher level of evolution.

For Wisdom, the fashioner of all things, taught me. For in Her there is a spirit that is intelligent, holy, unique, manifold, subtle, mobile, clear, unpolluted, distinct, invulnerable, loving the good, keen, irresistible, beneficent, humane, steadfast, sure, free from anxiety, all-powerful, overseeing all, and penetrating through all spirits that are intelligent and pure and most subtle. For Wisdom is more mobile than any motion; because of Her pureness she pervades and penetrates all things.

- The Book of Wisdom of Solomon (Volume IV)

There are instances in the book of Proverbs where Wisdom is personified as a female. Female imagery begins the book of Proverbs in Chapters 1-9 and also ends the book in chapter 31. In Proverbs 9:1-6 she is depicted as a figure with a home inviting those in need of wisdom to enter. She says "Come, eat of my bread and drink of the wine I have mixed. Lay aside immaturity, and live, and walk in the way of insight." In Proverbs 8:15-21, she not only identifies herself as the divine companion, but also as the source of order in society and success in life. In chapter 31:10 she is personified as the ideal woman for an Israelite man in a section titled Ode to a Capable Wife. There is debate about the status and place of Woman Wisdom in relation to the divine. Some have interpreted her as a companion to the divine, an abstraction, an extension to the divine, or a Goddess. Further information about the nature of Wisdom is found in Proverbs 8:22-30. In these verses "wisdom speaks of herself as having been created before anything else and as Yahweh's companion and even assistant at the creation of the ordered world." It has also been argued that personifying Wisdom as a woman adds a mythical nature to proverbs. This would line up with the ancient Near Eastern view that every male deity had a female counterpart.

Posted by jeronimus at 12:28 AM No comments: 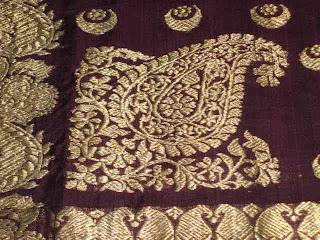 Resembling a twisted teardrop, the kidney-shaped paisley is Iranian and Indian in origin, but its western name derives from the town of Paisley, in central Scotland.
In Tamil the design is known as mankolam and has long been used in India. It resembles a mango and has sometimes been associated with Hinduism.
In Persian the design is known as boteh jegheh and it has long been used in Iran since the Sassanid Dynasty.
Some design scholars call the distinctive shape boteh and believe it is the convergence of a stylized floral spray and a cypress tree: a Zoroastrian symbol of life and eternity. A floral motif called buteh, which originated in the Sassanid Dynasty (200–650 AD) and later in the Safavid Dynasty of Persia (from 1501 to 1736), was a major textile pattern in Iran during the Qajar Dynasty and Pahlavi Dynasty. In these periods, the pattern was used to decorate royal regalia, crowns, and court garments, as well as textiles used by the general population.
The pattern is still popular in Iran and South and Central Asian countries. It is woven using gold or silver threads on silk or other high quality textiles for gifts, for weddings and special occasions.
-Wikipedia
In Hinduism the design is symbolic of the goddess, or so I've been told. I seem to remember hearing on a TV documentary that the image of a cypress tree bowing in the wind was taken up by Islamic artisans as a symbolic motif representing submission to the will of Allah. My wife, who is from a Hindu background, calls the boteh a "mango design".
-Jeronimus
Posted by jeronimus at 9:25 PM No comments:

Email ThisBlogThis!Share to TwitterShare to FacebookShare to Pinterest
Labels: art 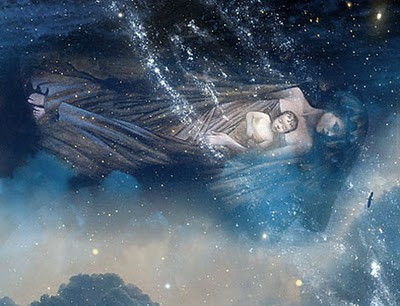 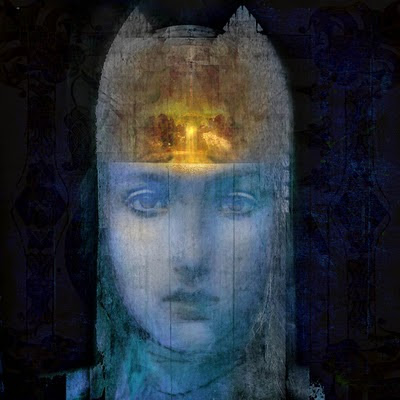 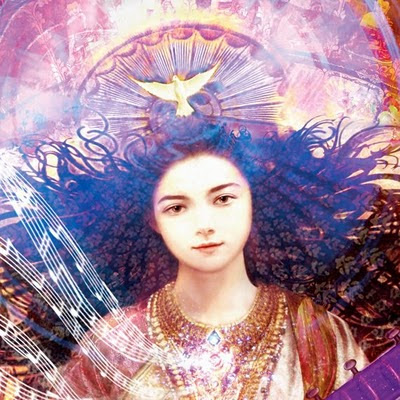 Some digital artworks depicting the Cosmic Mother, by the American visionary artist Greg Spalenka.
Posted by jeronimus at 11:20 AM No comments: 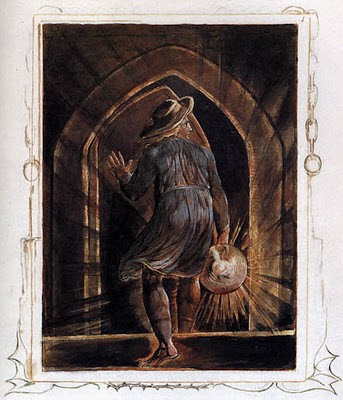 Los is a character from William Blake's mythological writings, and perhaps the figure Blake himself most identified with. Blake had a vision in which he met and became one with Los.
Blake refers to him as the "eternal prophet", creator of the visionary city of Golgonooza. Los is regularly described as a smith, beating with his hammer on a forge, which is metaphorically connected to the beating of the human heart. The bellows of his forge are the human lungs.
Los resembles the archangel Michael, who brings light to the gloomy regions of the subconscious, and the Ida nadi of yoga.
In this illustration by Blake, Los is seen entering a tomb, carrying the sun in his right hand. Los is an anagram of sol, the sun.
In Greek folklore, St Michael also assumed the god Hermes' role as the psychopomp who leads souls to Hades after death, going where other angels would fear to tread. In this he is like the Hindu deity Shri Bhairava, an aspect of the ascetic god Shiva, who, in his asceticism and absorption in the  innermost Self, is completely unaffected by the world of the living and the dead, and can happily inhabit a graveyard without fear, aversion, and risk of possession. Shri Shiva/Bhairava presides over the heart chakra on the left side.
Posted by jeronimus at 4:10 PM No comments: