The Givenness of Things 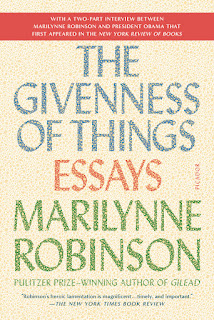 On September 14, 2015, in Des Moines, Iowa, President Obama and the writer Marilynne Robinson sat down to talk. They recorded a conversation that, in the president’s words, was designed to cover “some of the broader cultural forces that shape our democracy and shape our ideas, and shape how we feel about citizenship and the direction that the country should be going in.” The two had a warm and wide-ranging discussion, later published by The New York Review of Books and posted to iTunes, addressing Robinson’s writing life and Obama’s admiration of her novels; the democratic virtues expressed at Little League games, in emergency rooms, and in school buildings; and their shared sense that once upon a time democracy itself was considered an ongoing achievement. (The conversation has now been appended to the paperback edition of Robinson’s most recent essay collection, The Givenness of Things.) In the midst of some observations about American “goodness and decency and common sense on the ground,” the president arrived at a moment of synthesis, confronting an issue that, he said, “I’ve been struggling with throughout my political career.” continue reading 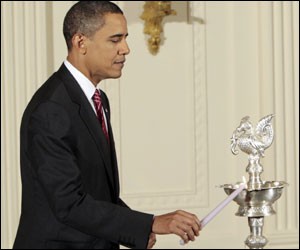 Barack Obama was the first American president to officially celebrate Diwali, the festival, observed by Hindus, Jains, Sikhs and some Buddhists, which marks the victory of light over darkness. Shri Mataji has said that this is the time of birth of Lord Jesus, the Light of the World. Although millions of people celebrate the birth of Jesus Christ on Dec. 25, most scholars agree that he wasn't born on that day, or even in the year 1 A.D.
Posted by jeronimus at 12:05 PM No comments: