Email ThisBlogThis!Share to TwitterShare to FacebookShare to Pinterest
Labels: Music

The Flower of Sahasrara 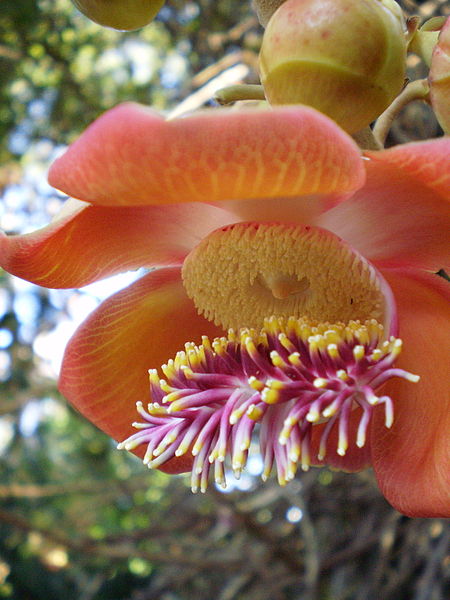 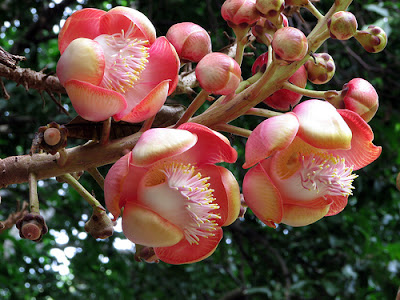 Flowers of Couroupita guianensis, known as the Cannonball tree, due to its hard, woody, spherical fruits.
The Tree is native to tropical South America, but seems to have been growing in India for at least 3000 years. How it got to India is a mystery.

These highly fragrant flowers were given to Shri Mataji on many occasions. She was very fond of them and commented that they are the flowers of the Sahasrara Chakra. I have also heard that the rose is associated with this Chakra.

The trees are grown extensively in Shiva temples in India, where they are called Shiv Kamal and Kailaspati. It is called the Nagalingam tree in Tamil. The flowers are called Shivalinga flowers in Hindi; Nagalinga Pushpa in Kannada; Nagamalli flowers or Mallikarjuna flowers in Telugu. Hindus revere it as a sacred tree because the petals of the flower resemble the hood of the Naga, a sacred snake, protecting a Shiva Lingam, the stigma. 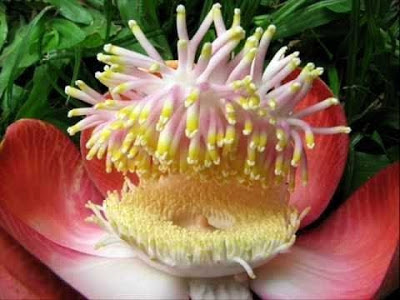 Email ThisBlogThis!Share to TwitterShare to FacebookShare to Pinterest
Labels: sahasrara

The Lotus of a Thousand Petals 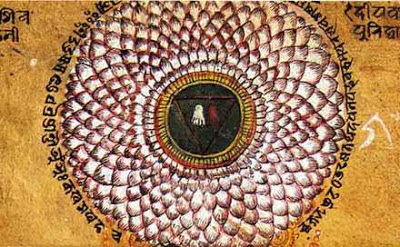 The Sahasrara Chakra is the seventh and highest centre of the subtle body, and is located at the crown of the head.

In this antique diagram, it is depicted as a white lotus of many petals. (In yoga texts, the Sahasrara is described as having a thousand petals).
At the centre of the lotus are the feet of the Supreme Being/Self. One is shown white, representing Shri Shiva (the masculine, un-manifest half of the Self), and one red, representing Shri Shakti (the feminine, creative half of the Self).
The trikona, or triangle, may represent the three qualities that pervade the universe: the creative, sustaining and destructive powers, enclosed by the circle of time.

A beautiful image from Indian devotional poetry reveals the crown of the head as a pedestal on which the cool, fragrant, lotus feet of the Divine may rest. In India, the feet of the Divine are considered to pour out blessings and auspicious vibrations, just as in Hindu mythology, the sacred Ganges, source of all sustenance, is said to flow from the feet of Lord Vishnu.

When a person's sahasrara opens, they experience Self-realisation. After this happens, Shri Mataji Nirmala Devi recommends daily meditation with the attention lightly on the sahasrara. Some ancient yoga texts say to put the attention on the brow centre, but these were probably written with the assumption that the aspirant would not yet have had self-realisation - an achievement considered very rare and difficult in previous times. Placing the attention at the crown for meditation, means that the awareness is above the distractions of the mental level, as the lotus of sahasrara blooms above the turbulent or murky waters of the lake of mind, and its petals repel the droplets of thoughts.

In Jewish mysticism, the Sephirot centre known as Kether (literally 'crown'), is similar in it's qualities to the Sahasrara of yoga philosophy. Situated at the top of the Tree of Life within the body, it represents pure consciousness and union with the Divine.
The mystical Sufi strain of Islam has a system of subtle centres known as latifas. The highest latifa: Akfha (the 'most subtle') is also located at the crown of the head, and is the point of unity where beatific visions of Allah are directly revealed.

Modern, New Age interpretations often depict the Sahasrara as having a violet or purple colour, but this is not seen in traditional paintings and scriptures. This probably comes from the idea that the colours of the chakras follow the colours of the rainbow, starting with red at the first centre, orange yellow green blue and violet. Traditionally, however, the white colour represents the purity of this centre, and its integration of all the elements and colours. White contains all colours.
Sometimes it is described as a lotus of multicoloured petals, and often depicted as an inverted lotus, with the petals opening downward to release divine nectar and fragrance into the brain.

This South Indian temple is crowned by an inverted sahasrara lotus. 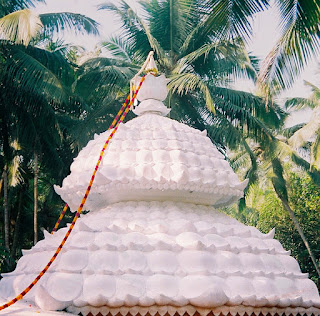 Posted by jeronimus at 3:30 PM No comments: