The ground-breaking jazz musician, John Coltrane, was deeply influenced by Indian spirituality. According to Bill Cole, the jazz musician and ethnomusicologist, he was a practitioner of yoga. By 'yoga', he almost certainly meant, not the system of physical postures, but the spiritual practice aimed at Self-realisation. 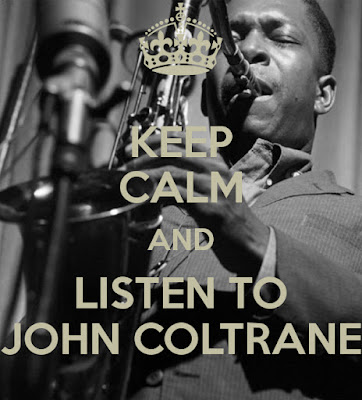 Raised a Methodist Christian, Coltrane came to believe in the truth of all religions. His first wife was Muslim, and his second wife, Alice, was a devotee of Indian spirituality who later established a Vedantic centre in California. It was probably at least partly due to Alice's influence that Coltrane also developed a strong interest in Eastern philosophy, and studied Hindu texts such as the Bhagavad Gita.

The Indian spiritual concept of 'raga' fascinated him in particular because of its application to his own music. 'Raga' (also spelled 'rag') can be translated as 'emotional state'. The word also refers to the ancient musical scales used to invoke specific moods, and associated seasons or times of day.

Mian Tansen, the famous 16th century Indian master musician, had the power, according to legend, to influence nature by playing the appropriate raga. For instance, when he played Rag Deepak (named after a burning lamp), the weather would become hot, or lamps would magically light themselves. His performance of Rag Megha (cloud) was said to have summoned rain.

Coltrane was aware of the potential power of raga. He once said in an interview:

"I would like to discover a method so that if I want it to rain, it will start right away to rain. If one of my friends is ill, I’d like to play a certain song and he will be cured; when he’d be broke, I’d bring out a different sound and immediately he’d receive all the money he needed. But what are these pieces and what is the road to travel to attain a knowledge of them, that I don’t know. The true powers of music are still unknown. To be able to control them must be, I believe, the goal of every musician. I’m passionate about understanding these forces. I would like to provoke reactions in the listeners to my music, to create a real atmosphere. It’s in that direction that I want to commit myself and to go as far as possible,"

The Indian influence is obvious In the posthumously released album 'Om', named after the syllable sacred in Hinduism, Buddhism and other Indian religions. The track titles are references to Indian spiritual concepts, and the recording even features chanting from Hindu and Buddhist texts. 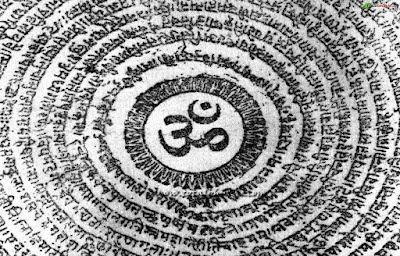 Coltrane described Om as the "first syllable, the primal word, the word of power". For him, this universal sound preceded and formed the basis of musical creativity. In Yoga philosophy, with its system of chakras, the Om is embodied as Shri Ganesha in the Mooladhara Chakra. This chakra is the basis of the whole subtle system, and is prerequisite for the existence of the second Chakra, the Swadisthana, which is the seat of artistic creativity. The Swadisthana is the domain of the Goddess Saraswati, often depicted playing a vina, an Indian stringed instrument.

Not long before he died in 1967, Coltrane had intended to spend six months studying Indian music in depth with Ravi Shankar. Shankar had already met Coltrane in 1964 and taught him the basics, noting his intense interest in the subject. It would have been interesting to hear how his music might have changed, had this training occurred.

Coltrane's music is Jazz, not Indian classical music, but he no doubt drew from the spirit of the raga, and other traditions, in his own personal way. Specifically, he sometimes used an underlying drone, like the continuous tampura sound that supports the melody of the raga. He often improvised around a very limited set of notes, even focussing on a single note, as Indian musicians do when playing ragas. His time signatures often resemble the Indian rhythmic patterns known as 'tals'. Generally he moved from the conventional chord changes of jazz to a modal way of playing, similar to the raga, in which a single emotion is evoked.

Many jazz musicians have been deeply influenced by Coltrane and have also explored Indian music and spirituality with varying degrees of success.

Jazz-Indian fusion music doesn't always work for me. When it doesn't work, it's because only a superficial flavour of indian-ness has been adopted, rather than a deep understanding of the spiritual ideas underlying Indian music. Coltrane's universal spirituality touches the same depths as that of the Indian masters, without adopting Indian styles in a literal way.

Coltrane said that one day he had a very distinct spiritual awakening which changed him fundamentally. An overwhelming experience of joy led him to give up an addiction to drugs overnight, and prompted him to asked the Divine for the ability to spread this joy to others. For Coltrane, as it is in India, music was much more than a form of entertainment; it was a way to the attainment of truth. 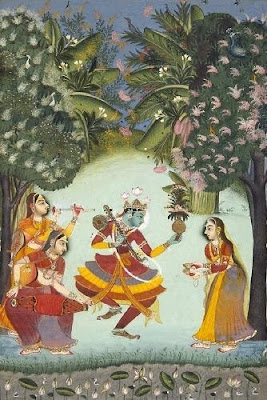 Posted by jeronimus at 3:21 AM No comments: