'Religions are in the end too complex, wise and fascinating to be abandoned simply to those who happen actually to believe in them'.
- Alain de Botton


Although describing himself as an atheist, the Swiss British philosopher Alain de Botton talks about the 'deep self' - the self which transcends the everyday needs for material sustenance, and the chatter generated by superficial social interactions.
He has identified several important functions, common to the world religions, which help us to stay in contact with this deep self, and become more human. These include: educational principles unique to religious movements, religious art and culture, collectivity, the setting aside of time for contemplation.

While he shares the modern suspicion of ritual and religious indoctrination, he recognises that there are positive aspects to religious rituals, for example, the combination of aesthetic and moral principles in the Buddhist tea ceremony; art and code of conduct each reinforcing the other. He sees scheduled religious rituals and festivals as a way of repeating and reaffirming valuable life lessons, to combat the innate forgetfulness and lack of willpower the vast majority of us suffer from, our immersion in the mundane. 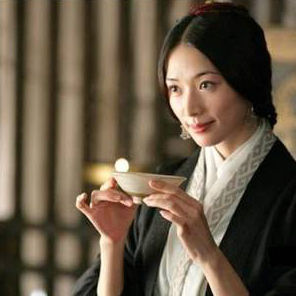 Crucial scene from the film Red Cliff in which the beautiful noblewoman Xiao Qiao delays and instructs an arrogant and ruthlessly destructive warlord through a tea ceremony, and so helps to bring about his defeat.

While religion is not everyone's cup of tea, anyone who has studied architecture would have to admit that it has produced some of the most beautiful buildings in the world. I had little interest in Islamic culture and religion, until I visited the Alhambra palace and gardens in Spain, many years ago. One building convinced me that I was missing out on something. Not that I converted to Islam, but I saw immediately that aesthetic subtlety of that degree is based on something true and worthwhile.
I had similar experiences at the Acropolis in Athens, and at Chartres Cathedral in France.
I see it as a sign that a religion is going off - becoming a corporation rather than a source of spiritual renewal - when it starts to build ugly buildings. As de Botton points out, this is not a superficial attitude; it's not judging a book by its cover. A lack of aesthetic awareness is usually a sign of simplistic or prejudiced thinking.
What springs to mind are photos I have seen of hideous concrete blocks housing the administrative headquarters of certain religions, towering disrespectfully over their own most sacred shrines.
Posted by jeronimus at 10:32 AM 2 comments: 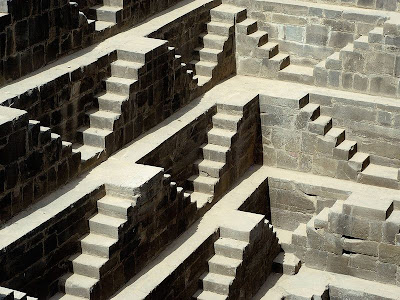 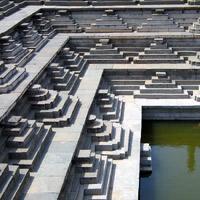 From the time of the Pyramids, monuments have reached for the sky in an effort to impress, while the step wells of India are monuments to introspection. They are inverted pyramids, reaching into the earth, to find water, the source of life. The abstract qualities of the architecture impart an awesome sense of purity, stillness and sacredness.
The top two images are of Chand Baori in Rajasthan, while the lower three are of the recently excavated stepped tank at the ruins of the Vijayanagara capital at Hampi in Karnataka. Hampi is identified with the historical Kishkindha, the Vanara (monkey) kingdom mentioned in the Ramayana. 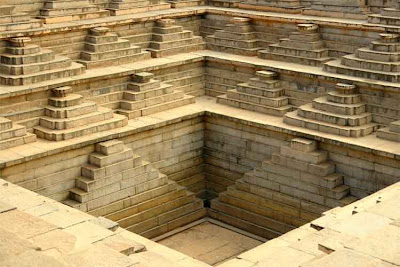 Posted by jeronimus at 9:52 PM No comments: