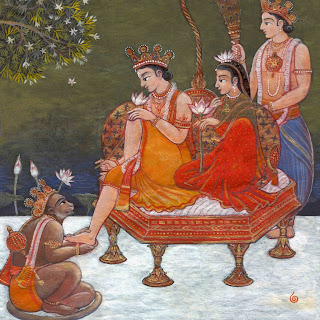 Lord Rama was an Incarnation of the Supreme Self who deliberately forgot His divine identity in order to become a human being (an ideal one).
After performing intense and prolonged austerities, the demon Ravana had won a boon from the god Brahma (or Shiva?), and asked that he become invulnerable from death at the hands of any god or fellow demon. Contemptuous of apparently frail human beings, he neglected to ask for immunity from them, thus creating a loophole which allowed Shri Rama (the all-powerful Lord Vishnu in human form) to kill him and free the world from oppression.
Posted by jeronimus at 12:20 PM No comments:

The Dishonesty of Ego

In Western culture, ego is often thought of as 'healthy', or at worst a necessary evil. But constructing an artificial sense of self based on the lie of separateness, can have catastrophic consequences not only for the person but for entire societies. Dorothy Rowe writes:

Can you bear to remember that time in your life when you were going along feeling secure and thinking, "This is me, this is my world, that was my past, this will be my future," when suddenly you found that you had made a major error of judgement? When you realised that many of the ideas underpinning your whole sense of being a person - that sense of "I", "me", "myself" - had been invalidated by events?
Have you ever had the sensation of falling through infinite space, shattering, crumbling, of being about to disappear like a raindrop into the ocean? Perhaps you knew that what was falling apart was not your sense of self but some of your ideas. You knew that you now had to go through a period of uncertainty until new ideas emerged. But if you did not know this, you would have been utterly terrified, so terrified that you would do anything never to go through such an experience again.
Psychiatrists and psychologists have either ignored this experience, maximised its significance as a full-scale "breakdown", or minimised it as a "panic disorder". Yet this feeling of falling apart is an essential part of our lives and of most of our narratives. In The Wizard of Oz, for example, Dorothy and her companions emerge wiser and strong from the invalidation of their idea that the wizard could solve their problems, while paradoxically Othello is destroyed by the invalidation of his belief that his wife Desdemona had been unfaithful.
We first experience the terror of being invalidated when we are small children, but by the time we are 3 or 4 we have learned a way of avoiding it: we have learned how to lie. From then on, whenever we glimpse the faintest possibility that our "selves" might be threatened with annihilation, we lie.
First of all, we lie to ourselves. Why? Because we fear that we do not have the strength and courage to face the truth of our situation. We even lie about lying, preferring to call our lies anything but a lie. We say: "He's in denial" or "She's being economical with the truth".
All lies have networks of consequences we did not expect or intend. The lies we tell may well protect us and our personal - or collective - sense of self in the short term, but in the long term and in a linked-up, complex world, the consequences can be truly disastrous. After all, when we lie to ourselves and to others, we multiply a thousandfold the inherent difficulties we have trying to determine what is actually going on inside us and around us.

-New Scientist, 21 June 2010
Dorothy Rowe is an Australian psychologist and emeritus associate of the Royal College of Psychiatrists.
Read the full article
Posted by jeronimus at 10:57 AM No comments:

Email ThisBlogThis!Share to TwitterShare to FacebookShare to Pinterest
Labels: ego

The Self is infinite

The Self appears to be finite because of ignorance.
When ignorance is destroyed, the Self,
which does not admit of any multiplicity,
reveals itself by itself:
just as the sun reveals itself
when it evaporates the clouds covering it. 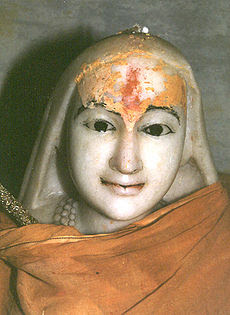 Posted by jeronimus at 11:38 PM No comments:

Email ThisBlogThis!Share to TwitterShare to FacebookShare to Pinterest
Labels: Self, Shankaracharya 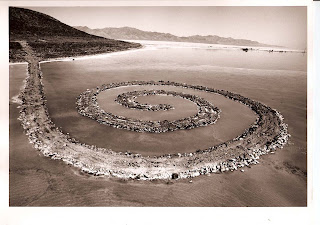 Spiral Jetty
Meditation helps to anchor someone in the present. A new study has found it also stops people from anticipating pain.
Brain scans revealed that the most advanced meditators were the least likely to anticipate pain induced by a laser device, which made the experience more bearable.
Lead researcher Dr Christopher Brown, said: 'Meditation is becoming increasingly popular as a way to treat chronic illness such as the pain caused by arthritis.
'Recently, a mental health charity called for meditation to be routinely available on the NHS to treat depression, which occurs in up to 50 per cent of people with chronic pain.
'However, scientists have only just started to look into how meditation might reduce the emotional impact of pain.'
The study, to be published in the journal Pain, found that participants who meditated showed unusual activity in the brain region known to be involved in controlling attention and thought processes when potential threats are perceived.
Dr Brown said: 'The results of the study confirm how we suspected meditation might affect the brain.
'Meditation trains the brain to be more present-focused and therefore to spend less time anticipating future negative events. This may be why meditation is effective at reducing the recurrence of depression, which makes chronic pain considerably worse.'
Dr Brown said the findings should encourage further research into how the brain is changed by meditation practice.
dailymail.co.uk
Posted by jeronimus at 8:12 PM No comments: