The Immortality of Self

When Arjuna is reluctant to go to battle, because some of the princes on the enemy side are his relations, Shri Krishna explains to him that the Self cannot be slain:

What is not there cannot exist; what is there cannot be anything but existent. The distinction between these states has been recognized by those who study truth. That which pervades this universe is imperishable; no one can destroy that changeless being. It is these bodies that house the everlasting, imperishable, incomprehensible self that have an end. Therefore fight.

He who thinks the Self can be a slayer, and he who thinks the Self is slain, are both mistaken. The Self does not kill, nor is it killed. For the Self is never born and never dies, nor may it ever become non-existent. This unborn, everlasting, abiding Self is not slain when the body is slain. Knowing the Self to be unborn, imperishable, everlasting, changeless, Arjuna, how can a man slay anyone or be slain?

As a man gets rid of worn out clothes and put on new ones, so the Self puts away outworn bodies and puts on others that are new. Weapons do not cut the Self, fire does not burn it, waters do not wet it, the wind does not dry it. Not capable of being cut, burned, wetted, or dried, the Self is everlasting, present in all things, unchangeable, unmoveable, for ever the same.

Knowing that the soul is immaterial and unalterable, you should not grieve, Arjuna.

Posted by jeronimus at 6:16 PM No comments:

Email ThisBlogThis!Share to TwitterShare to FacebookShare to Pinterest
Labels: Self, Shri Krishna 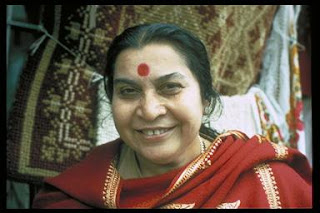 H.H. Shri Mataji Nirmala Devi, founder of the worldwide meditation movement called Sahaja Yoga, passed away peacefully on 23rd February, 2011 in Genoa, Italy, aged 87.
Hers was a life unlike any other. Whether walking with kings or walking barefoot with Gandhi, it was a journey of extremes managed effortlessly, living as she did with grace, dignity and, always, loving guidance.
Born of a royal dynasty, she conferred as a child with Mahatma Gandhi, living for a time in his ashram, was a medical student and a freedom fighter, was an adored mother, grandmother, great grandmother and the wife of a distinguished diplomat who himself was decorated by the kings and presidents of innumerable countries and knighted by the Queen of England. But incredibly, after all this, with her family grown and settled, she then embarked on an even more extraordinary mission.
Shri Mataji was born to Christian parents in India. Spiritually enlightened, she knew from very early on that her unique spiritual gift must be made available to everyone. And so it was that in 1970 she founded Sahaja Yoga meditation, which she shared freely. Using simple techniques, she discovered a unique process of Self Realisation through which huge masses of people could easily achieve the peace of true meditation. She charged no money, and instead insisted this was a birthright which should be available to all who desired it, at no cost. She said “There can be no peace in the world until there is peace within”.
read more
Posted by jeronimus at 10:54 AM No comments:

Every religion is true one way or another. It is true when understood metaphorically. But when it gets stuck in its own metaphors, interpreting them as facts, then you are in trouble.

Your sacred space is where you can find yourself again and again.

When you follow your bliss... doors will open where you would not have thought there would be doors; and where there wouldn't be a door for anyone else.

When we quit thinking primarily about ourselves and our own self-preservation, we undergo a truly heroic transformation of consciousness.

The privilege of a lifetime is being who you are. 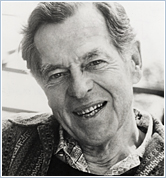 Posted by jeronimus at 5:58 AM No comments:

Email ThisBlogThis!Share to TwitterShare to FacebookShare to Pinterest
Labels: Film 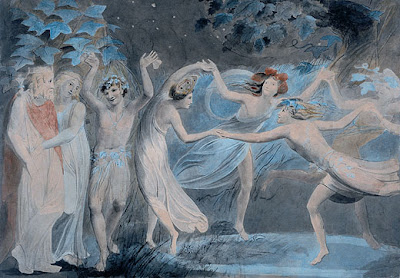 William Blake, an illustration of a scene from Shakespeare's A Midsummer Night's Dream.

A reading of Shakespeare gives the clear impression that he had realised the Self very deeply. Many of his works explore the theme of Selfhood, identity, and the ultimately tragic nature of ego.
In A Midsummer Night's Dream he suggests that the true nature of selfhood lies in a collective self (not in a Stalinist, statist sense, but as a natural consequence of the unity of being - Advaita).
As a playwright working with a troupe of actors, Shakespeare would have experienced this collective selfhood in which each member has a unique role but depends on the others. The play is much more important than individual egos.
The play within a play is a device Shakespeare loved to use. The play within A Midsummer Night's Dream is performed by a group of labourers, called 'mechanicals' by the character Puck.

"Identities in the play are not so much lost as they are blended together to create a type of haze through which distinction becomes nearly impossible. It is driven by a desire for new and more practical ties between characters as a means of coping with the strange world within the forest."

"David Marshall, an aesthetics scholar and English Professor at the University of California – Santa Barbara, takes this theme to an even further conclusion, pointing out that the loss of identity is especially played out in the description of the mechanicals their assumption of other identities. In describing the occupations of the acting troupe, he writes 'Two construct or put together, two mend and repair, one weaves and one sews. All join together what is apart or mend what has been rent, broken, or sundered'. In Marshall's opinion, this loss of individual identity not only blurs specificities, it creates new identities found in community, which Marshall points out may lead to some understanding of Shakespeare's opinions on love and marriage. Further, the mechanicals understand this theme as they take on their individual parts for a corporate performance of Pyramus and Thisbe. Marshall remarks that 'To be an actor is to double and divide oneself, to discover oneself in two parts: both oneself and not oneself, both the part and not the part'. He claims that the mechanicals understand this and that each character, particularly among the lovers, has a sense of laying down individual identity for the greater benefit of the group or pairing. It seems that a desire to lose one's individuality and find identity in the love of another is what quietly moves the events of A Midsummer Night's Dream. It is the primary sense of motivation and is even reflected in the scenery and mood of the story."

It's a little past midsummer here in Australia, but feels hot enough to be.
Posted by jeronimus at 9:39 PM No comments: