Here's an icon I painted not long ago, modelled loosely on the
composition of the Mother of Kazan (Russian).

I will be travelling for a month or so, with limited internet access,
so probably won't be posting much.
Posted by jeronimus at 12:30 PM 1 comment: 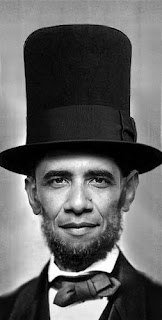 This is a rather well-done photoshop meld of Barack Obama and Honest Abe Lincoln, found on the internet.

American astrologers are excited by natal chart comparisons which show evidence of a metempsychotic link between the two leaders from Illinois.
Posted by jeronimus at 9:07 AM No comments:

Wind in the Trees

If minds are wholly dependent on brains, and brains on biochemistry, and biochemistry (in the long run) on the meaningless flux of the atoms, I cannot understand how the thought of those minds should have any more significance than the sound of the wind in the trees.
— C. S. Lewis, The Weight of Glory, page 139

Lewis is arguing against scientific materialism from a Christian dualist point of view: if minds are nothing but material interactions they cannot have any subjective meaning (there can be no self to which they can mean anything).

He is right about the necessity of a Self to ascribe meaning to experience; however, in Eastern Non-dualist philosophy individual minds have no significance or existence, only a single Mind can have significance or existence. There is no reason for this single Mind to be considered distinct from the 'material' world. There is no need for dualism.
In ancient Greece the leaves of the sacred grove of Dodona were said to produce oracular utterances through the rustling of their leaves in the wind. But who can say who is speaking? The wind might say that the leaves are speaking, and the leaves might say that the wind is speaking. The priests of the masculinist classical period would say that Jove was speaking. But the oracle was originally considered the voice of the Goddess Gaia: the Earth, or the entire material world, Itself.
Read about Dodona:http://en.wikipedia.org/wiki/Dodona
Posted by jeronimus at 11:52 AM No comments: