Kahlil Gibran and the Feminine Divine

Renowned for his literary masterpiece The Prophet(1923), Lebanese-American artist and writer Kahlil Gibran (1883–1931) began experimenting with the visual arts at a young age. Telfair Museums boasts the largest public collection of visual art by Kahlil Gibran in the United States, donated in 1950 by his lifelong supporter and mentor, Southern native Mary Haskell Minis. This exhibition concentrates on works that capture Gibran’s enduring belief in the oneness of all things, often characterized in his paintings and drawings as the feminine divine.
His representation of goddess imagery not only reflects his holistic belief in a Universal Spirit, embodied through symbolic female figures, but also reveals the powerful influence women exerted in his own life, molding him into the visionary poet and artist known to the world today. Gibran’s visual and literary works continue to inspire and resonate, as evidenced through contemporary women artists like Sawsan Al-Saraf, Sundus Abdul Hadi, and Tamara Abdul Hadi, whose work will be presented from May 26 through September 10 in the Jepson Center, creating a powerful dialogue between exhibitions.
Funding is provided by the City of Savannah’s Department of Cultural Affairs. 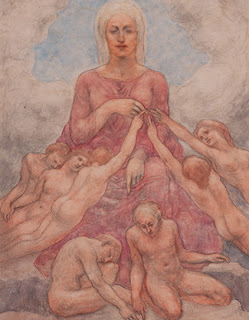 Posted by jeronimus at 8:41 PM No comments:


That which you are
is eternal and all-pervading
This Being does not pass away
with the passing away of the body.
The Spirit never dies.

It can never die
because it was never born.
It has always existed
and it can never cease to exist.
The Unborn Spirit never dies.

It is indestructible and imperishable.
No fire can burn it
nor any weapon ever harm it.
It is absolute, innocent and free.
The Changeless Spirit never dies.

It is embodied in all
Do not mourn it in any form,
neither in the form of the dead
nor of the living.
The Universal Spirit, who you are, never dies.

- Adapted by Graham Brown from the Bhagavad Gita

Posted by jeronimus at 8:03 PM No comments:

Email ThisBlogThis!Share to TwitterShare to FacebookShare to Pinterest
Labels: poetry, Self

Ten thousand flowers in spring, the moon in autumn,
a cool breeze in summer, snow in winter.
If your mind isn’t clouded by unnecessary things,
this is the best season of your life. 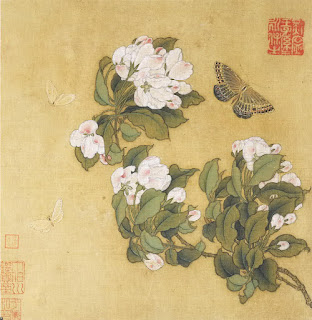 —Wumen Huikai (1183-1260), translated by Stephen Mitchell from The Enlightened Heart: An Anthology of Sacred Poetry, (Harper and Row, 1989)

Wumen Huikai was a Chinese Chan (Zen in Japanese) master most famous as the compiler of and commentator on the 48-koan collection The Gateless Gate.