The American translator, Coleman Barks, has helped make Djalleledin Maulana Rumi’s spiritual and mystical epics, the Masnavi and the Divan, amongst the most loved poetry in the US. The growing popularity of the the 13th century Muslim poet has even spawned an upcoming Hollywood biopic, with Leonardo DiCaprio at one time favoured to play the lead role.
Though, as a mystic, Rumi transcended man-made religious dogmas, he was also a devout Muslim, and a renowned Islamic scholar. Barks' translations are beautiful, but his interpretations downplay the Islamic inspiration of the Rumi's works almost to the point of erasure. In New Age quotations and anthologies of Rumi, there is often little or no acknowledgement of Rumi's religion. Instead, images of people doing hatha yoga on beaches, or even photos of Buddhist statues, are likely to accompany the quotes. 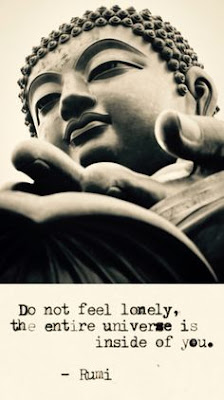 On one level there is nothing wrong with this - it is a testimony to Rumi's universality - but it may also be a kind of whitewashing, as some have suggested is the case with the choice of an actor of European background to play a Persian historical figure.
This article in The New Yorker examines this phenomenon:


... Like many others, Omid Safi credits Barks with introducing Rumi to millions of readers in the United States; in morphing Rumi into American verse, Barks has dedicated considerable time and love to the poet’s works and life. And there are other versions of Rumi that are even further removed from the original—such as the New Age books by Deepak Chopra and Daniel Ladinsky which are marketed and sold as Rumi but bear little resemblance to the poet’s writing. Chopra, an author of spiritual works and an alternative-medicine enthusiast, admits that his poems are not Rumi’s words. Rather, as he writes in the introduction to “The Love Poems of Rumi,” they are “ ‘moods’ we have captured as certain phrases radiated from the original Farsi, giving life to a new creation but retaining the essence of its source.”


Discussing these New Age “translations,” Safi said, “I see a type of ‘spiritual colonialism’ at work here: bypassing, erasing, and occupying a spiritual landscape that has been lived and breathed and internalized by Muslims from Bosnia and Istanbul to Konya and Iran to Central and South Asia.” Extracting the spiritual from the religious context has deep reverberations. Islam is regularly diagnosed as a “cancer,” including by General Michael Flynn, President-elect Donald Trump’s pick for national-security adviser, and, even today, policymakers suggestthat non-Western and nonwhite groups have not contributed to civilization.


For his part, Barks sees religion as secondary to the essence of Rumi. “Religion is such a point of contention for the world,” he told me. “I got my truth and you got your truth—this is just absurd. We’re all in this together and I’m trying to open my heart, and Rumi’s poetry helps with that.” One might detect in this philosophy something of Rumi’s own approach to poetry: Rumi often amended texts from the Koran so that they would fit the lyrical rhyme and meter of the Persian verse. But while Rumi’s Persian readers would recognize the tactic, most American readers are unaware of the Islamic blueprint. Safi has compared reading Rumi without the Koran to reading Milton without the Bible: even if Rumi was heterodox, it’s important to recognize that he was heterodox in a Muslim context—and that Islamic culture, centuries ago, had room for such heterodoxy. Rumi’s works are not just layered with religion; they represent the historical dynamism within Islamic scholarship.

Read full article: here
Posted by jeronimus at 1:06 AM No comments: