Posted by jeronimus at 9:24 PM No comments:


Spinoza believed that there is only one substance to reality, and that this singlular Substance is God/Nature, the immanent, not the transitive cause of all things’ and ‘absolutely infinite’.

Indian Advaita philosophy also posits that God and the world are one and the same. The Western mind has difficulty with the concept that God is immanent and not separate from world and Self, but Spinoza's Substance Monism gives Monotheism its true meaning: there is no being but God.

"The more you struggle to live, the less you live.

Give up the notion that you must be sure of what you are doing.
Instead, surrender to what is real within you,
for that alone is sure….
you are above everything distressing."

- Baruch Spinoza
Posted by jeronimus at 7:50 PM No comments:

Posted by jeronimus at 1:18 AM No comments:

Saga of the Oak

Everything is part of me,

I of all that is am part,

Stone and star and human heart.

Email ThisBlogThis!Share to TwitterShare to FacebookShare to Pinterest
Labels: poetry, The Self

Shri Nanakiji (Bibi Nanaki ji) was the older sister of Shri Guru Nanakaji, the founder of the Sikh religion.

She recognised her brother's holiness, from his infancy, and became a protective mother figure to him. She encouraged her brother's spiritual life, and was his first follower (the first Sikh). She suggested that he use music as a vehicle for spreading his teaching.

Shri Mataji has identified Nanaki as an incarnation of the Goddess, Devi. Shri Devi is the fiercely protective warrior aspect of the Goddess, but sometimes she takes birth as a close relative of great spiritual masters, to give them support in a quieter role.

Posted by jeronimus at 4:10 PM No comments:

Posted by jeronimus at 1:49 PM No comments:

The Divine Feminine as Wisdom in the Bible


Despite the devotion expressed towards Her in the Bible, the Feminine aspect of God has been neglected in the Christian churches (particularly the Protestant churches), some would say, to their detriment. This is no doubt due to the bias of an all male priesthood.

She is described as having existed before the Creation (perhaps always) and as the agent through which it was achieved. She is considered to be the Breath of God, and the manifestation of His power. Like the Holy Spirit (who some believe is the same being, and therefore a feminine, motherly aspect of the Holy Trinity) She is present in those who have the pure desire for God.

For She is the breath of the power of God,
and a pure influence flowing from the glory of the Almighty:
therefore no defiled thing can fall into Her.
For She is the brightness of the everlasting light,
the unspotted mirror of the power of God,
and the image of His goodness.
And being but one, She can do all things:
and remaining in Herself, She makes all things new:
and in all ages entering into holy souls,
She makes them friends of God, and prophets. 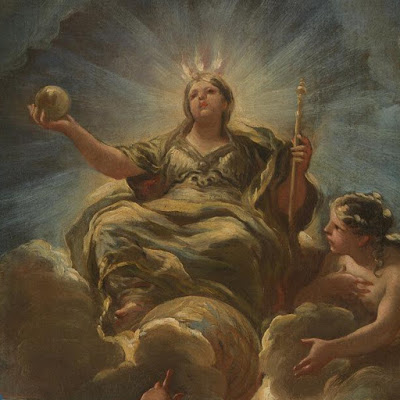 Posted by jeronimus at 3:45 AM No comments:

In the ancient Hindu philosophical system of correlates, the planet Jupiter represents the aspect of the Divine as Guru - spiritual teacher and upholder of Dharma. When we awaken this principle within us, we develop wisdom, discipline, and self mastery.
Brihaspati was a sage mentioned in the Vedas. He was the teacher or guru of all the gods. In time he became associated with the planet Jupiter. It is sometimes said that Jupiter is the Earth's protector. Its immense gravity field absorbing comets that could have wiped out life. The guru principle gives a person gravitas and dignity. Brihaspati is often depicted riding an elephant, the animal which best embodies this quality. The Sanskrit word guru, means ’weighty and venerable’, and is probably related to the Latin gravitas, from gravis, meaning ‘heavy’.

Shri Mataji has explained that Jupiter is the planet for the area of the subtle system known as the Void - bhava sagara in Sanskrit. Bhava sagara can be translated as 'Ocean of Worldly Existence' or 'Ocean of Illusion'. If we become lost in attachments to aspects of life, we fall into confusion. The inner master is the navigator who takes us across this ocean. In the subtle body this Void is located around the navel chakra at the centre of the body.
Jupiter takes approximately 12 years to complete a circuit of the Sun. A "Jupiter return", is a time when the planet is at the same position as it was at the time of birth. It therefore happens at the age of 12, 24, 36, 48 and so on. These are times in which there is an expansion of life's opportunities and sense of self-mastery.
Posted by jeronimus at 10:54 PM No comments:

To Pass into It 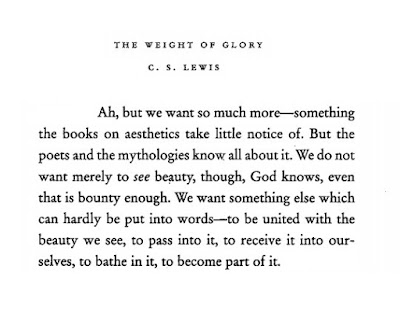 Posted by jeronimus at 9:31 PM No comments:

Remember You Are This Universe

Joy Harjo
Joy Harjo was appointed the new United States poet laureate in 2019. Born in Tulsa, Oklahoma, in 1951, Harjo is a member of the Mvskoke/Creek Nation. She is the author of several books of poetry, including An American Sunrise, which is forthcoming from W. W. Norton in 2019, and Conflict Resolution for Holy Beings (W. W. Norton, 2015). She is a current Chancellor of the Academy of American Poets and lives in Tulsa, Oklahoma.
Posted by jeronimus at 3:27 PM 2 comments:

Who Was The Buddha? 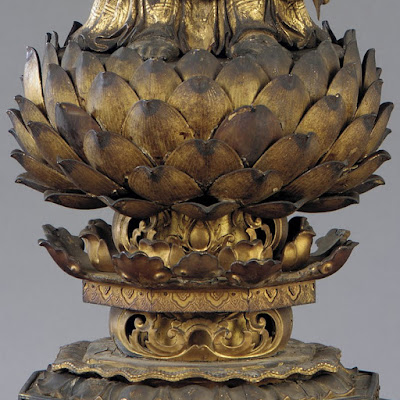 Who am I? What is the Self? This is the most fundamental of questions.

Buddhism has the concept of anatta (no self) which is usually interpreted to mean that souls and selves do not exist. However, The Buddha may have meant that individual, discrete selves are an illusion, but there is a singular, undivided Self that can be realised by one who has awakened from the dream of separateness (ego). This interpretation makes The Buddha's teaching compatible with the Indian philosophy of Advaita (non-duality).

Buddhists believe in reincarnation, which suggests the existence of souls. It may be that The Buddha saw souls as merely subtler forms of the gross body, and not something one should identify with. Perhaps this is the intention of the anatta doctrine. Centuries later, the sage Shri Shankaracharya wrote his Tad Niskala, which states that who you are is not the body, or the sheaths of the subtle body (soul), but Shiva (the Self of all that exists). Shri Mataji Nirmala Devi has said that Shri Shankaracharya was a reincarnation of The Buddha. Shankara encouraged devotion for the Adi Shakti, the feminine aspect of Shiva, the Universal Self, who manifests in each of us as the Kundalini. This is because, without Kundalini awakening, Self-realisation is not possible.

One might ask why The Buddha bothered to try to liberate people if he did not believe in souls, or selves. What would be the point of mere matter trying to enlighten mere matter? It's a good question. According to tradition, The Buddha did initially consider that perhaps teaching people about enlightenment would be a futile task. The answer may be that the Self, like the sun, must shine, no matter that there are clouds of ignorance and illusion. Suffering is due to the illusion of separateness, and this illusion should be dispelled, even if there are ultimately no 'others' who suffer.

The Buddhist scholar Alexander Wynne considers this issue, and also questions the emphasis on therapy in the contemporary offshoot of Buddhism, Mindfulness Meditation, in contrast to the Buddha's emphasis on Self-realisation as the main aim. In his article Who Was The Buddha?, he also tries to separate the mythical and historical figure of Gotama Buddha.

Read the article. here
Posted by jeronimus at 1:51 PM No comments:

“National identity is the last bastion of the dispossessed. But the meaning of identity is now based on hatred, on hatred for those who are not the same.”

― Umberto Eco
Posted by jeronimus at 9:20 PM No comments:


Einstein had called nationalism ‘an infantile disease, the measles of mankind’. Many contemporary cosmopolitan liberals are similarly skeptical, contemptuous or dismissive, as its current epidemic rages all around the world particularly in the form of right-wing extremist or populist movements. While I understand the liberal attitude, I think it’ll be irresponsible of us to let the illiberals meanwhile hijack the idea of nationalism for their nefarious purpose. Nationalism is too passionate and historically explosive an issue to be left to their tender mercies. It is important to fight the virulent forms of the disease with an appropriate antidote and try to vaccinate as many as possible particularly in the younger generations.

read more
Posted by jeronimus at 7:49 PM No comments:

Email ThisBlogThis!Share to TwitterShare to FacebookShare to Pinterest
Labels: Einstein 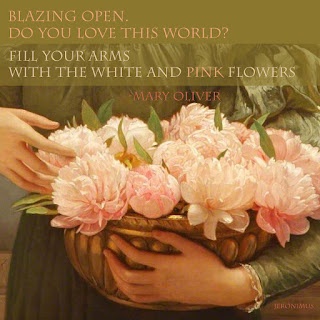 Posted by jeronimus at 5:04 AM No comments:

The Hindu goddess, Shri Durga, is worshipped at this time of year, especially in Bengal, to celebrate Her victory over evil forces.

The ancient Persian goddess, Anahita, has many similarities to Shri Durga: both were originally warrior goddesses (although in the case of Anahita, later becoming more associated with water and the fertility of the earth), both are virgin goddesses, and both have a lion vehicle.

The Egyptian lion-headed warrior goddess Sekhmet is also similar. She was seen as a fierce protector of the Pharaohs. Her name means 'power' or 'might', and one of her epithets was "One before whom evil trembles".

Posted by jeronimus at 3:23 PM No comments:

William Blake at the Tate

From 11 September 2019 – 2 February 2020 the Tate Britain gallery in London, is showing over 300 works by William Blake; perhaps a once in a lifetime opportunity to appreciate his visionary genius on such a scale.

According to his biographer, Alexander Gilchrist, Blake's design The Ancient of Days was "a singular favourite". He made many versions of it, including one completed shortly before his death.
Posted by jeronimus at 4:27 AM No comments: